NOT THE FIRST, HOPEFULLY NOT THE LAST

When I first started seeing reports on local bikepacking groups of people riding north or south down the Minnesota/Wisconsin border to towns like Winona and Lacrosse and then transporting themselves in the opposite direction on Amtrak I knew immediately that I wanted to do the same. I chatted my friend Art, who had accompanied me on previous trips (link link), to see if he would be interested in partnering up and he was quick to say yes. With that I began to plan the route. We are by no means the first to do this and I surely hope that this will inspire others to also utilize Amtrak and this route. 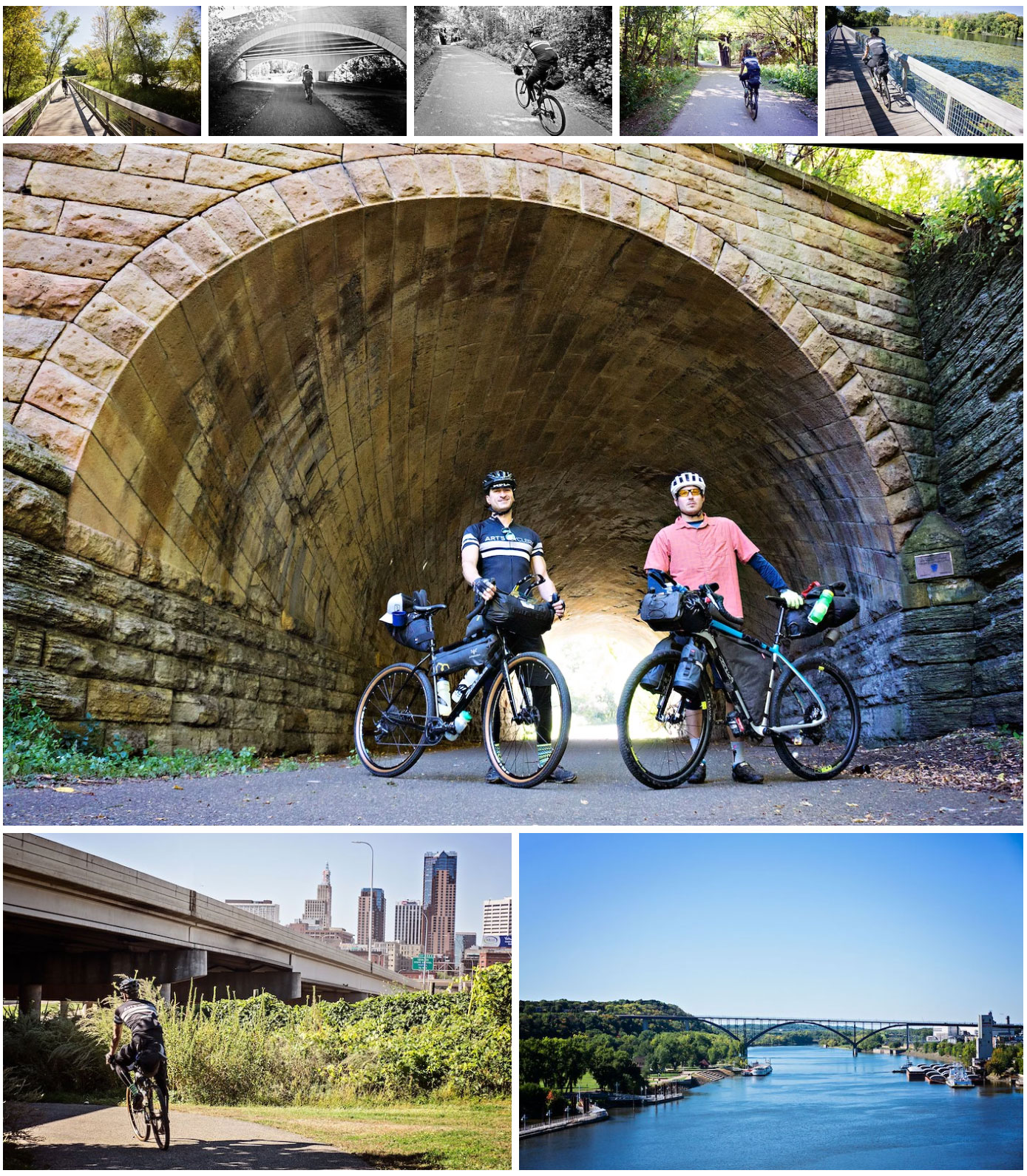 We departed on Friday morning from my home in Saint Paul. Our route led us south to the Mississippi River where we crossed to the other side in downtown Saint Paul. Taking the bike trail, we ventured to Mendota Heights and dropped down into the Minnesota river bottoms at the Sibley house.

The Sibley House, considered the oldest stone building in Minnesota, was built in 1835 from limestone blocks cut from a nearby quarry. Built on the southern bluff of the Minnesota River upstream from its confluence with the Mississippi it was in this building that plans were drawn up for the Minnesota territory. 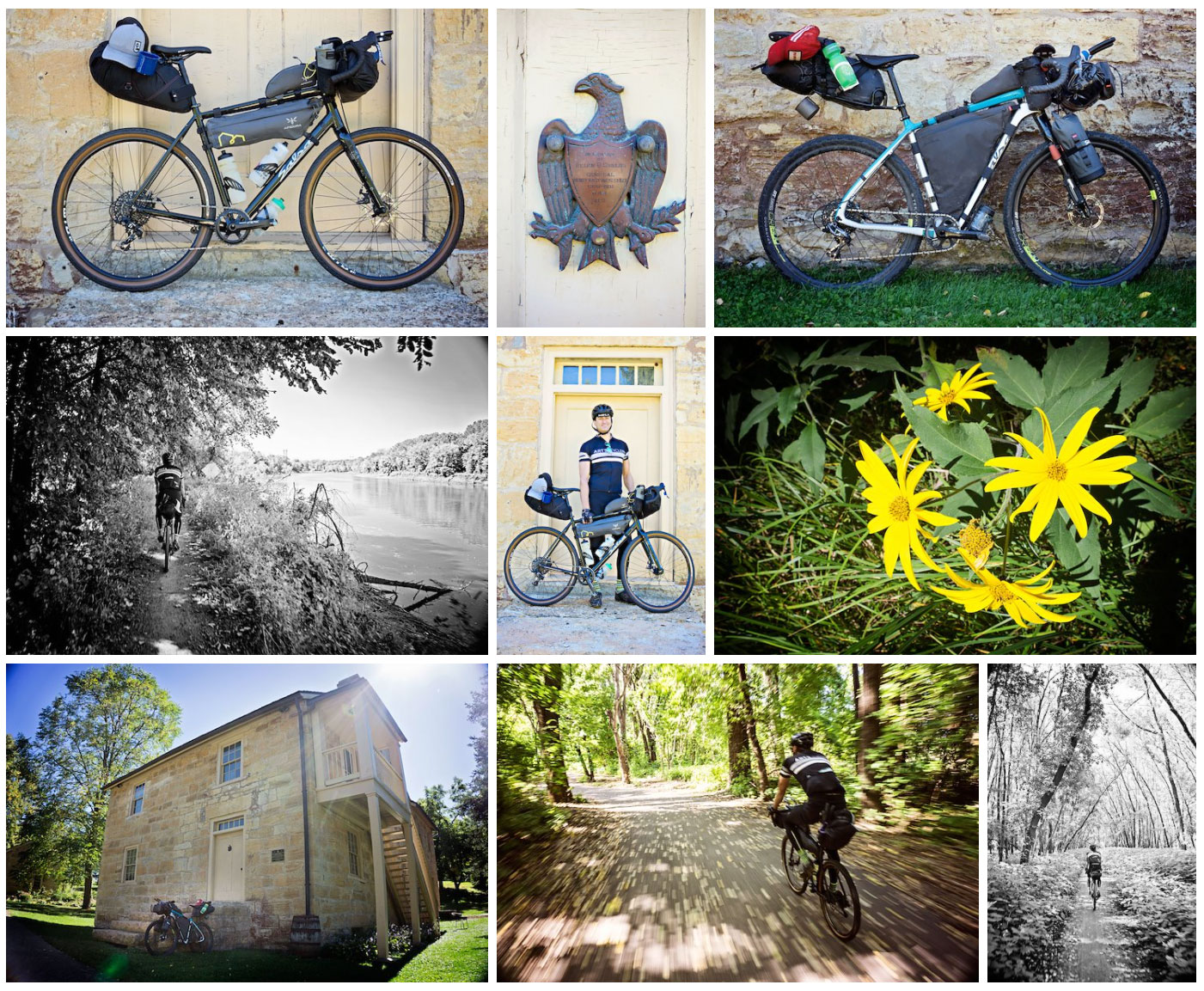 The Minnesota River Trail is located within the flood plain of the Minnesota River. One of the most natural and picturesque trails in the twin cities it is affectionately called "River Bottoms". It only takes but a few minutes for one to forget how close they are to the city as you are immersed in the natural surroundings of the bottoms. The trail meanders along the river, the trail ever-changing depending on the flooding, before popping you out directly under the 494 bridge, complete with its own ever changing graffiti. Passing by the bridge we ventured on further south before exiting the bottoms at Highway 77. 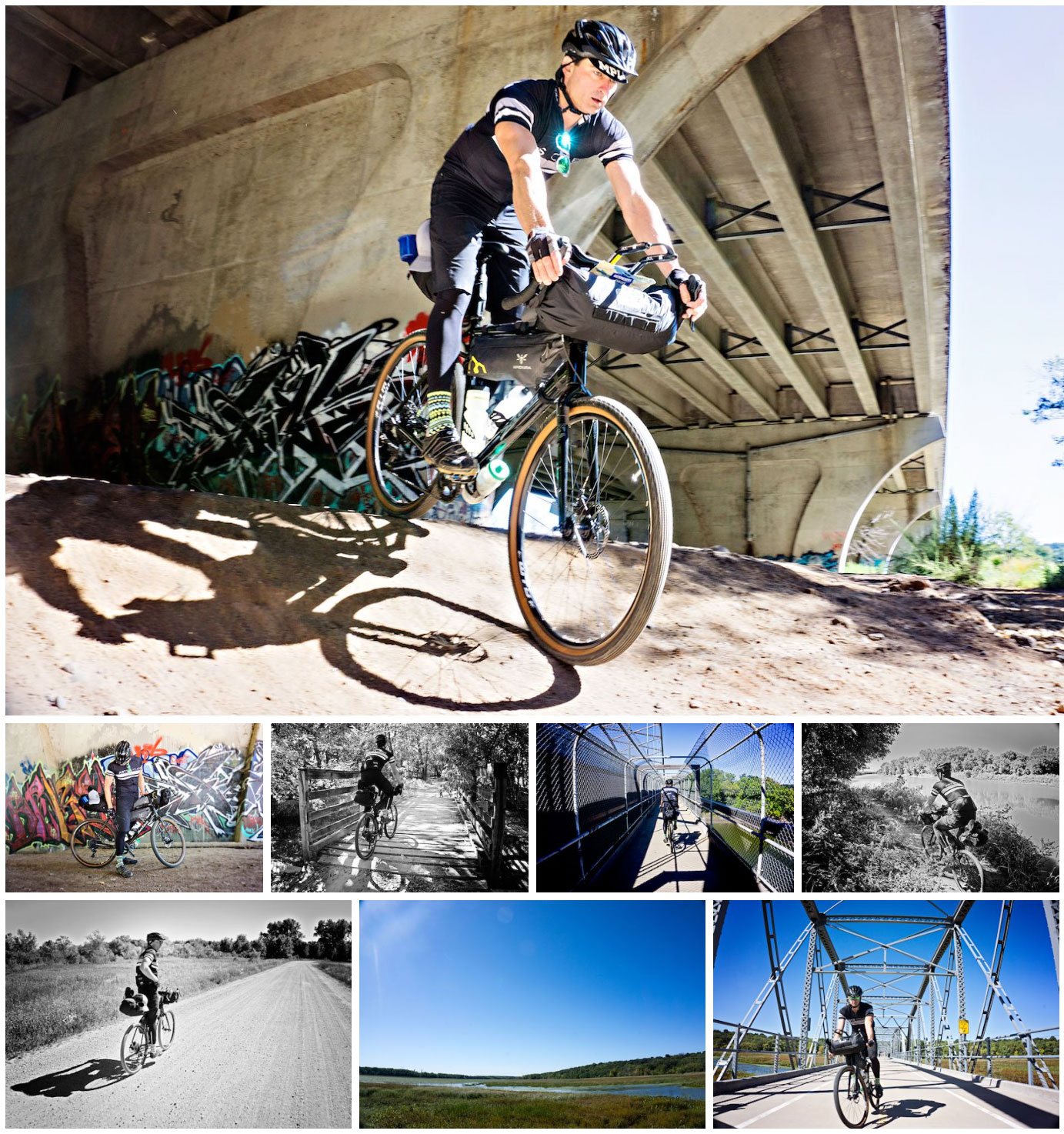 After climbing back up out of the river bottoms the suburbs engulfed us, mile after mile of housing tracks, strip malls and new development. By far the least exciting portion of the trip, it couldn't pass fast enough before the farmers' fields, not yet destined for housing development, took back the land dumping us out into the gravel roads in the nearly 5000-acre University of Minnesota Outreach, Research and Education (UMore) Park. Stopping for lunch, consisting of Backpackers Pantry, we refueled quickly before throwing a leg over our bikes to head on. 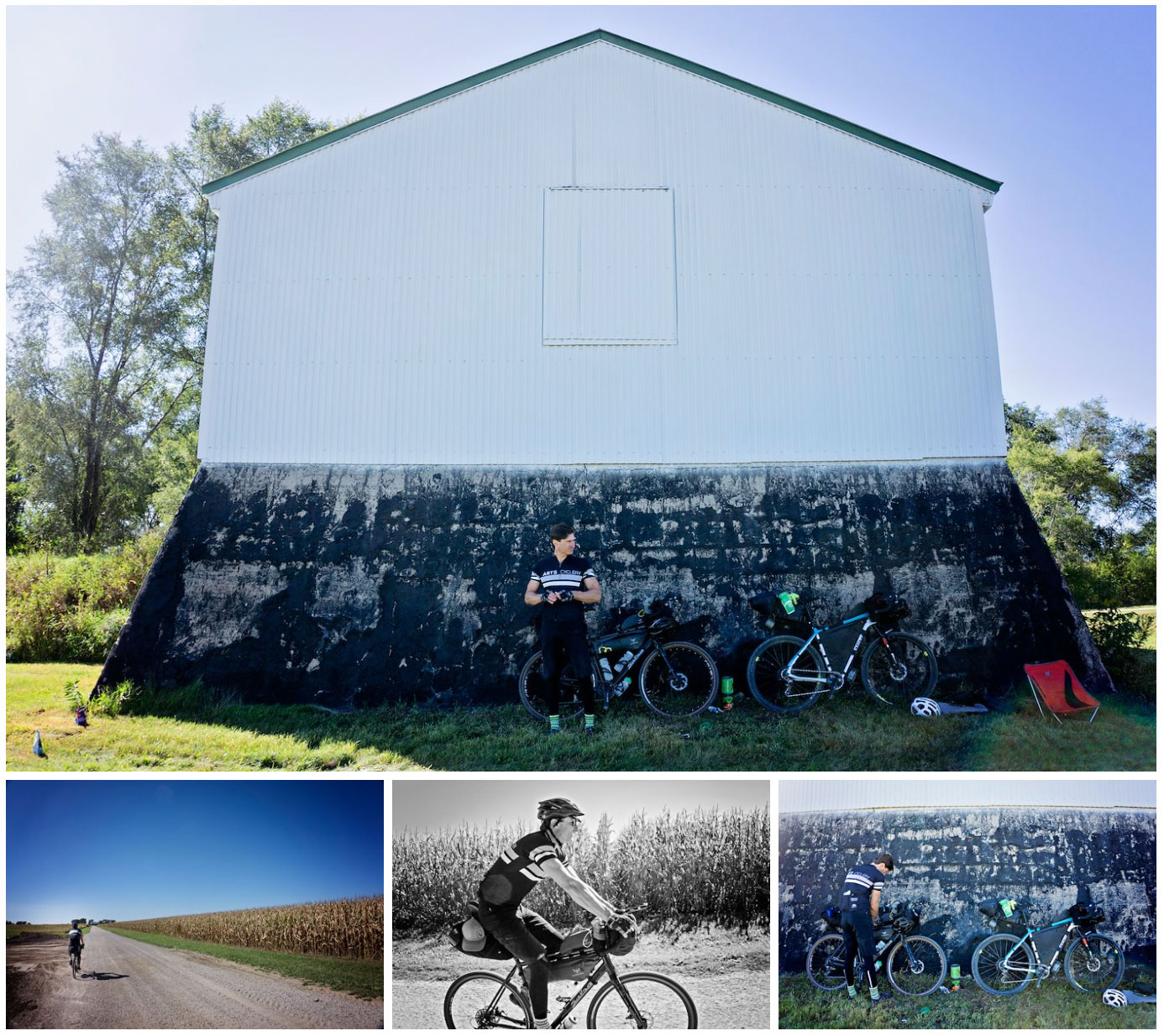 Just 30 miles outside the cities you'll catch a glimpse of something that doesn't look like anything else for hundreds of miles around. The Watt Munisotaram is a Cambodian Buddhist temple in Hampton, Minnesota, only a couple of minutes off the route. Established in 1982, it wasn't until 2007 that they consecrated a much larger temple, a sign of its importance to both Cambodian and non-Cambodian Theravada Buddhists in Minnesota, the Midwest, and the entire United States.

Monks and priests live year-round at the temple but rolling into the grounds all was quiet on a Friday afternoon with only one person, working on setting up flags for the upcoming weekend, in sight. Wanting to maintain our respect for the area, we took just a handful of photographs before exiting as quietly as we came. 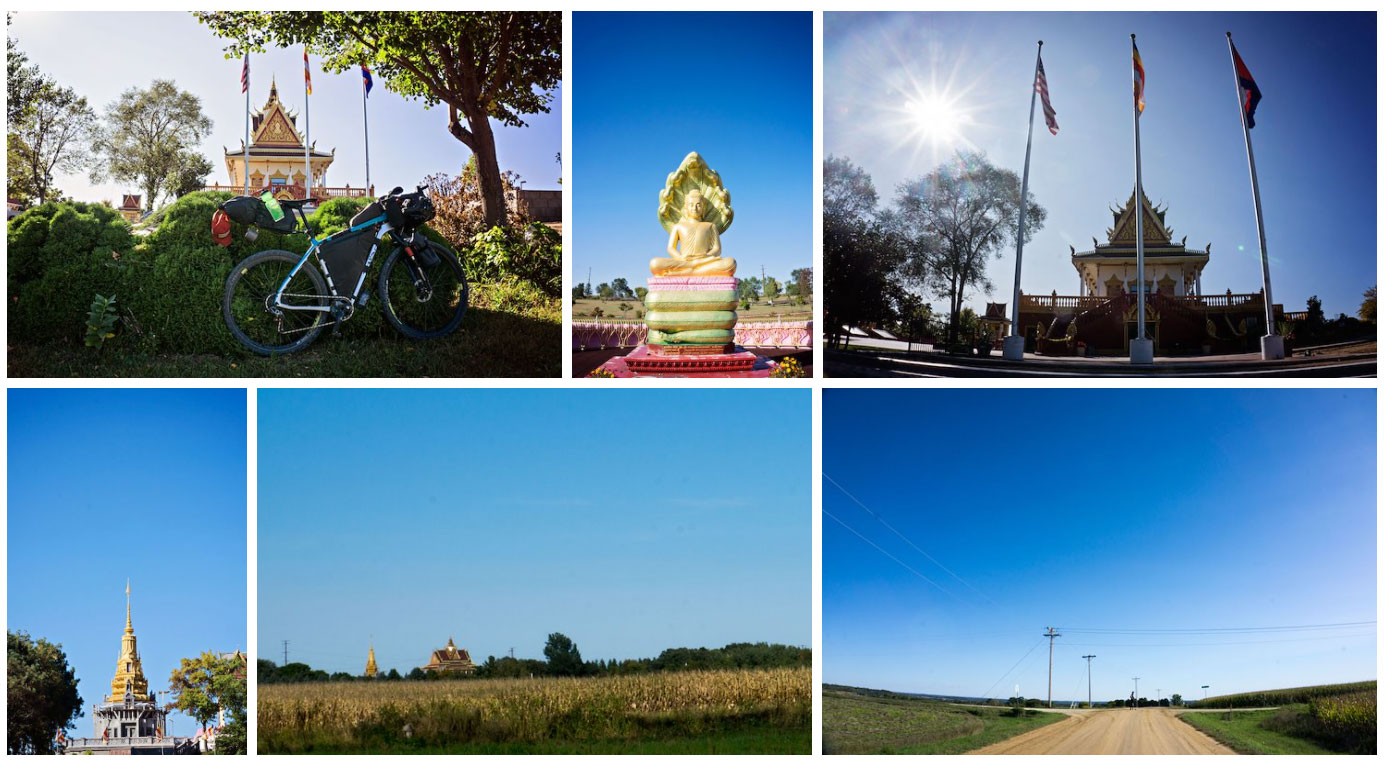 My first revisions of the route had beautiful scenery, epic gravel roads but no logical places to camp. I scoured maps looking for state forest land where dispersed camping is acceptable but continued to draw a blank. I did a quick reroute putting us in Cannon Falls for the night. With two campgrounds available we had options but neither struck me as ideal, both being more geared toward the RV crowd. I let Art know I was struggling to find an ideal place to camp and it was within minutes that he let me know his former coworker and friend were offering up their parent's lakeside home in Cannon Falls. Consider the route officially changed. 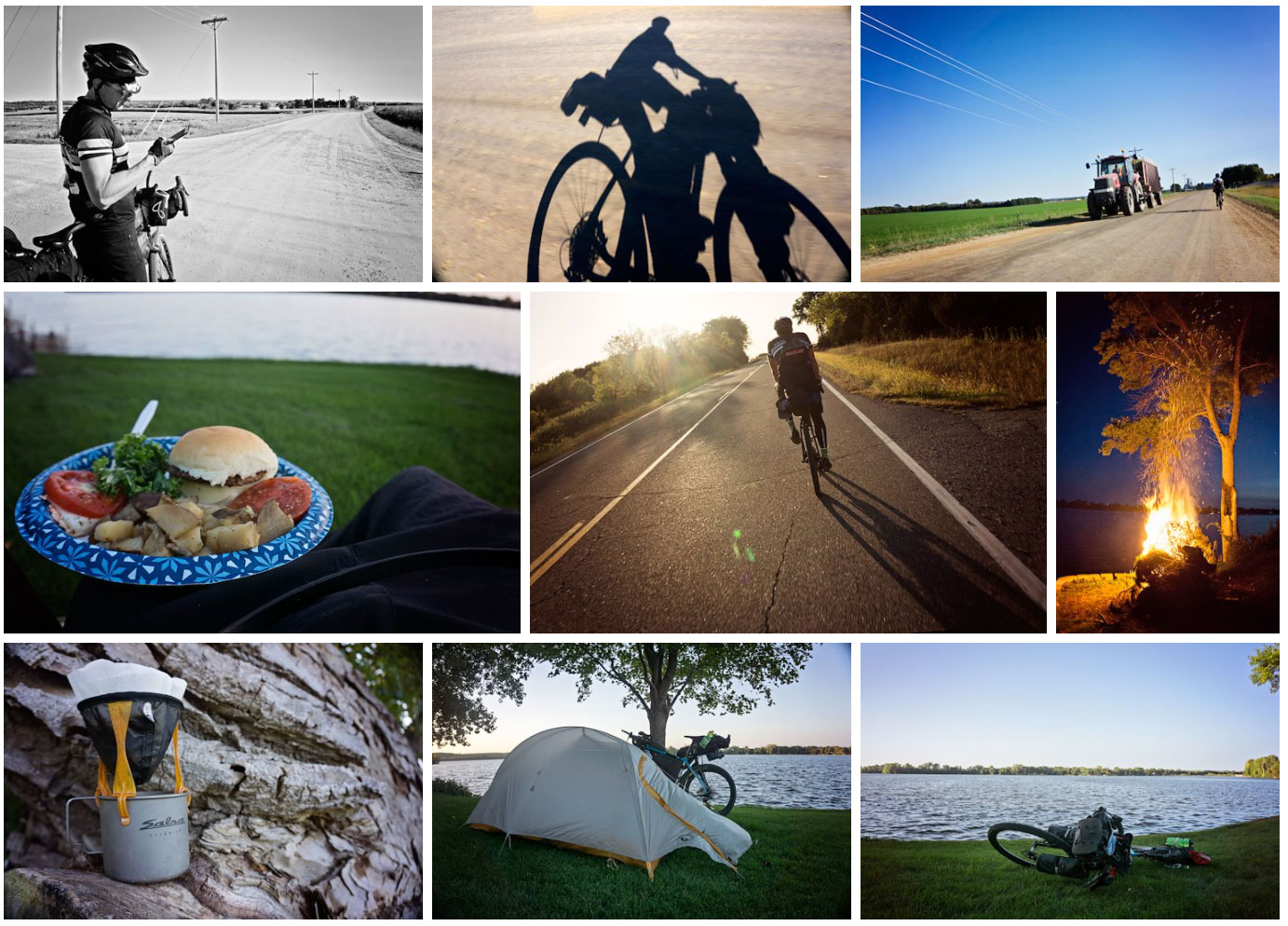 The city of Cannon Falls was named after the falls located along the Cannon River. The city is the westernmost trailhead of the Cannon Valley Trail. Lake Byllesby, which sits on the west side of town, was created when the river was dammed in 1910 by the Henry Byllesby Company. Constructed using mostly hand labor, a crew of 500 individuals completed the work in just nine months. 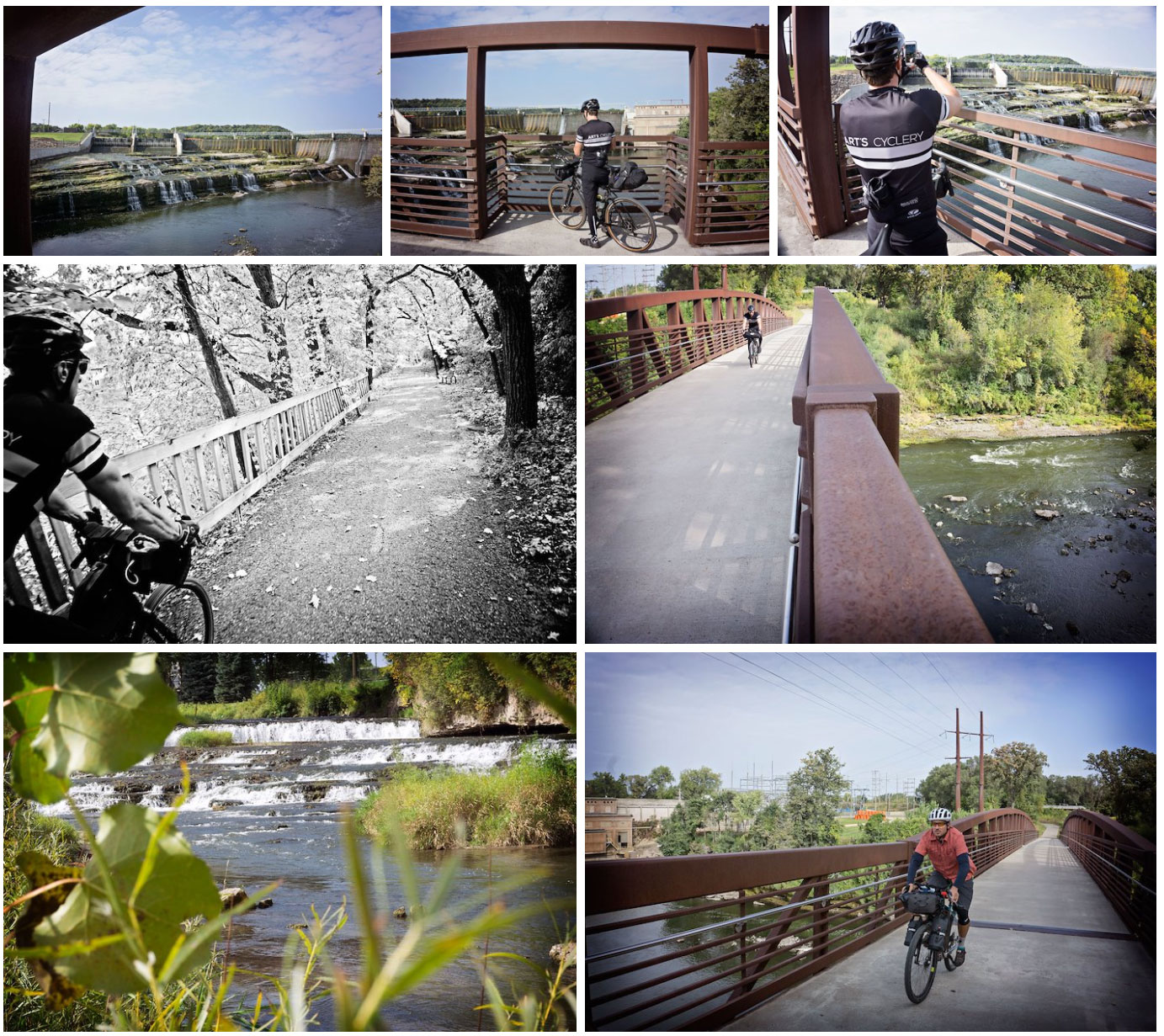 Leaving Cannon Falls we jumped onto the Cannon Valley Trail. The trail occupies the route of a former Chicago Great Western railroad line that connected Red Wing and Mankato in 1882. Over 100 years later, in 1983, when the railroad announced its intention to abandon the railway, citizens realized the recreational potential of the line. The rail to trail was dedicated in 1986, and the asphalt pavement was completed in 1992.

Expecting to sit back and enjoy a relatively flat start to our second day my legs felt sluggish as I urged my bike down the trail. Rolling into Redwing I had plenty of doubt about my ability to complete a day that had all the climbing packed into the second half. Redwing would be the last town we'd pass through before the nights end, so we fueled up on Arby's roast beef and hit the liquor store to stow away a few beers in our pack. The second half of the day was also where we were greeted with the first of what would prove to be endless headwinds for the remainder of the trip. Every time we turned South or East it punished us relentlessly, we're talking demoralizing headwinds that make you feel like you are not moving forward. 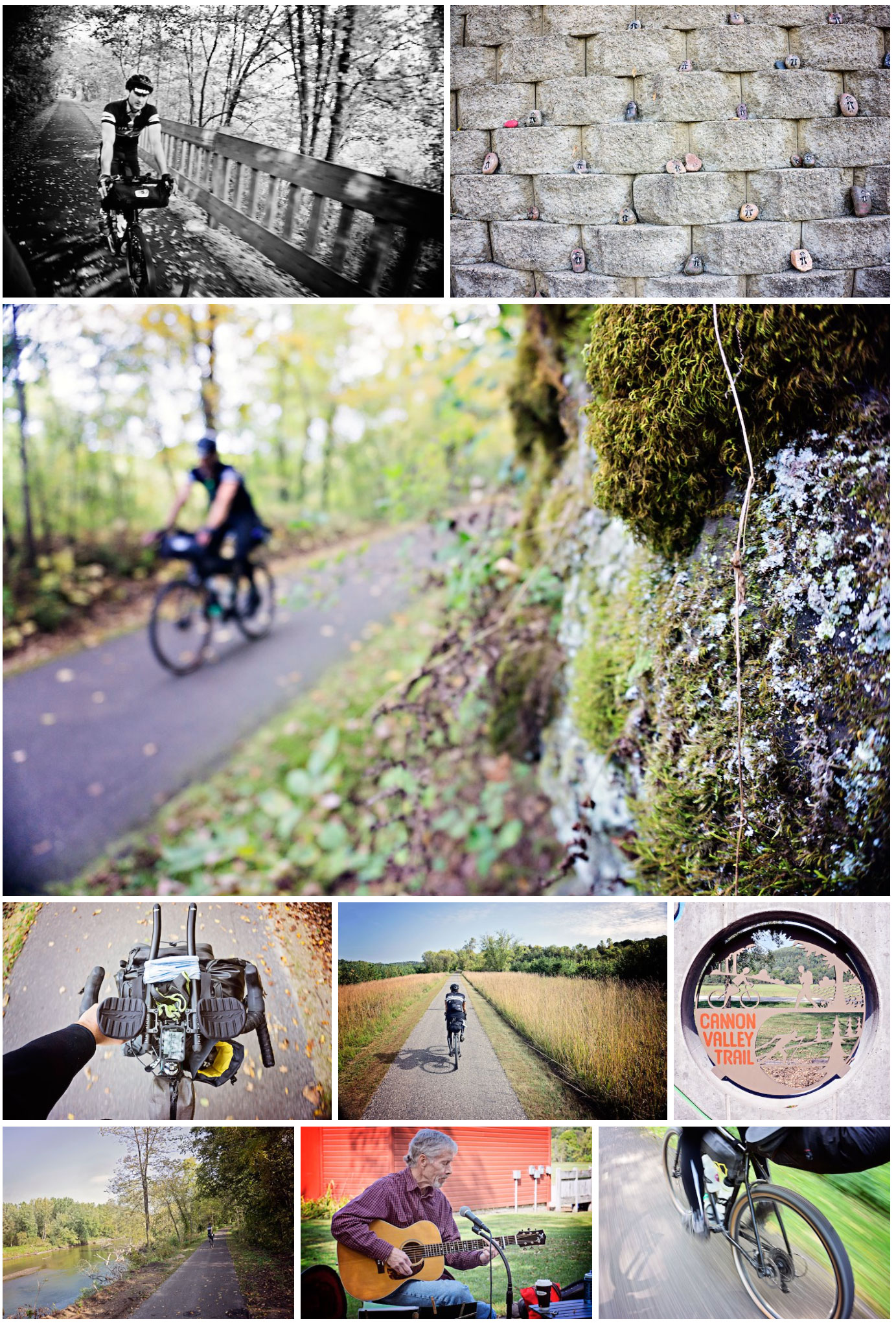 During the planning stage I began scanning the maps to come up with a place to camp on night two. I landed on the Zumbro Bottoms located in the Richard J. Dorer Memorial Hardwood State Forest. With my legs feeling like they had little left to give a long descent drops you into the bottoms. The area has three campsites, all considered primitive, designed to furnish only the basic needs, fire ring, table, vault toilet, and a hand-pumped well. We stayed at the North campground which is the first you will come upon.

The North campground is small, with maybe five sites total, but at this time of year there was only one other camper. We setup tents, filled a zip-lock bag with cold well water to cool our beers, and set to making a fire to enjoy while eating our dehydrated pad thai. 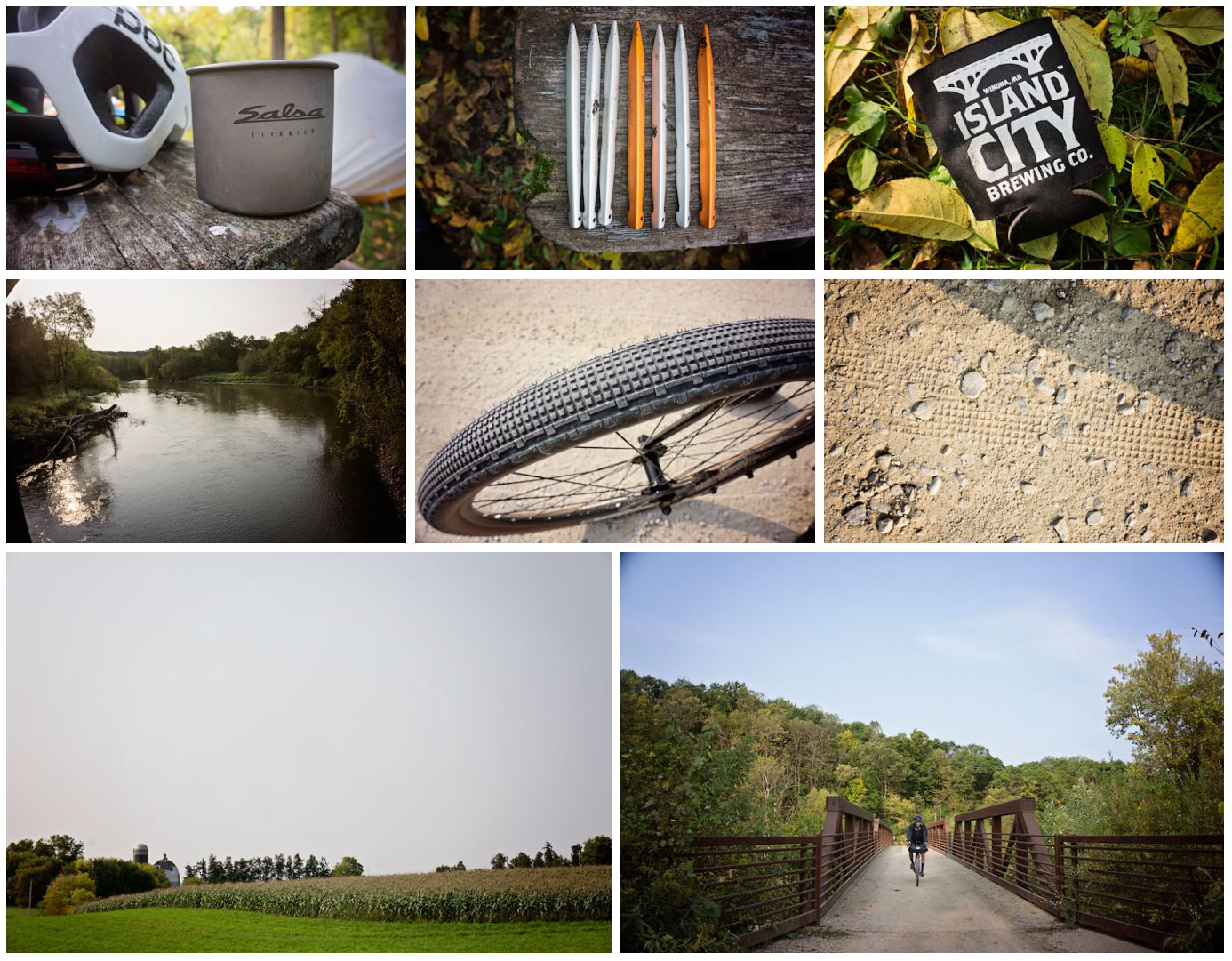 BRING ON THE CLIMBS

If I could go back in time I'd gladly make this a four day trip, sure that would mean most likely needing plenty of reroutes to find camping each night but 70+ miles a day, pushing into relentless headwinds, made me less focused on taking photos and enjoying the ride but rather just trying to keep pushing the bike forward.

Our third and final day had over 4,000 feet of climbing involved and a deadline of making it to Winona in time to catch our Amtrak on time. Riding into the Zumbro Bottoms it was all downhill, so it came as no surprise that a challenging climb greeted us as we climbed back out of it.

The town Elba could not have come sooner. The headwinds from the day previous had only intensified and my legs were screaming for a break. We'd tackled a couple of 10 percent, cat 4 climbs and pushed through some epic gravel roads.

As we rolled into town, I had already identified the Elba House on the route as a place to eat. I'm a fan of getting a cheeseburger at all times possible and the Elba House bacon cheeseburger did not disappoint. A burger, fries, Coca-Cola and a Miller Lite (ordered a High Life but they didn't have it) was sure to fuel me for the rest of the trip, right? 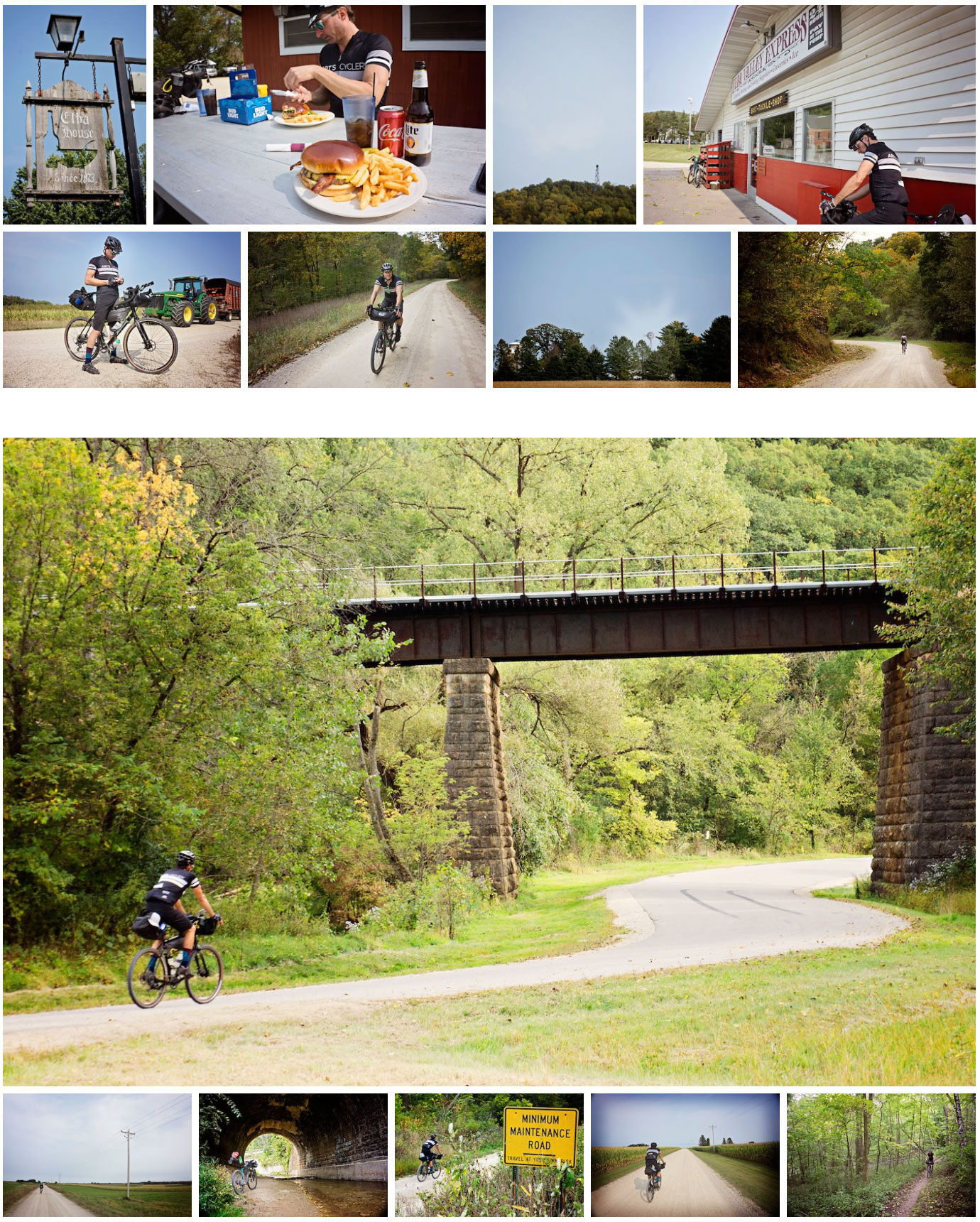 Riding into the backside of Winona I angled for the bluffs that overlook the city. I went to school in Winona over twenty years ago but many of the mountain bike trails I rode back then are still there so I set course to show Art some of my favorite views of the city before heading down into town.

After grabbing a sandwich in Winona we made our way to the train station. Neither of us had rideden Amtrak, let along bringing our bikes onto the train, so we wanted to get there early. Arriving at the station we discovered that it was unoccupied, so we set to taking the bags off our bikes, based on information we had gleamed from other travels online.

When the train did arrive, there was a mass exodus of travelers but it was quickly evident that they were not destined for Winona but rather a nicotine fix.

The Amtrak employees turned out to the be the salt of the earth people. Out attendant for our car was quick to get a conductor who opened a baggage car for us to put our bikes on. They had removed the car that had specific bike racks so instead we just laid our bikes in a wide open car, part of me felt disappointed that I had spent time removing all my bags when I hadn't needed to but better safe than sorry.

The train arrived in Winona at 7:45 and arrived in Saint Paul at 9:45. It would have been fun, and more photographic, to take a train during the day time hours but to do that you'd need to do this route in the reverse as the train to Winona goes in the morning and the train to Saint Paul leaves in the night.

Sign up for email promotions.
no thanks
Thank you for signing up!
Close
Loading More Photos
Scroll To Top
Close | Clear All & Close
Close Window
Loading
Close